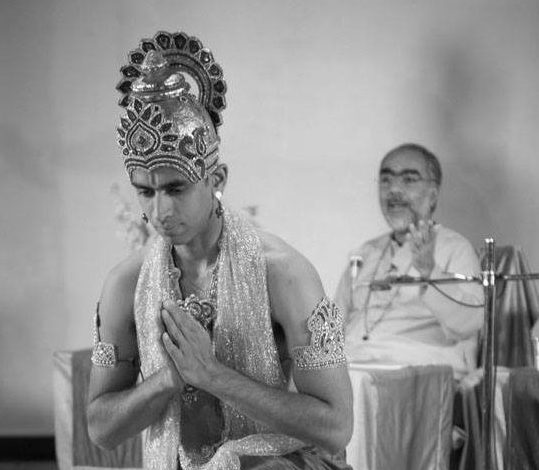 My first Global CHYK Camp experience was at the end of 2011, where we were guided through Chapter 2 of the Taittiriya Upanishad by Swami Swaroopananda (Swamiji). I was completely and utterly blown away by the entire experience. There is nothing quite so profoundly simple yet overwhelming as being allowed to express the inner seeker within us, when you are shown the Path by a realised Master like Swamiji in an environment purpose built for such self-inquiry and contemplation.

I was hooked. When the topic of the next camp in 2012 was announced as Ramayana, my anticipation grew even higher and let me tell you, there is such joy, your wildest expectations are exceeded! I have always been fascinated by the old legends of Hindu folklore such as the Puranas and the great epics, Ramayana and the Mahabharata. However, I soon realised that their depth, purport and subtlety are best understood when revealed by one who lives the ideals taught in these vast reservoirs of knowledge. So far, I had a natural inclination toward viewing spirituality and the ultimate Goal through the lens of the intellect. As such, I had a burning curiosity to find out what the path of devotion (bhakti) truly entailed, and whether it was for me or not. I had a notion that the way of the intellect was better for me; I was yet to be proven wrong.

And boy, did Swamiji prove me wrong! This camp was unlike any other CHYK camp for me. Swamiji, the cut and dried master of Vedanta, morphed into the master of that elusive but irresistible art – storytelling. The Ramayana was brought alive in his classes. Through three classes every day, his words painted, emoted, pondered, fleshed out, enlivened and dramatized the epic battle between good and evil, and the righteous path of Dharma which are the central themes of the Ramayana. Swamiji became the embodiment of the all-consuming devotion that is the life-blood of the Ram Charit Manas and showed us, that gnana without bhakti is tasteless and dry. We are beings of head and heart; Swamiji showed us that one is empty without the other.

How could one not feel love for Lord Rama, the infinitely compassionate and steadfastly righteous perfect Man? Every word, every deed and every tale of His is a lesson in dharmic living. His consort, Mother Sita and his brother Lakshmana signify purity and dedication. Only when these two qualities rule the heart, perfection is attainable and the Divine becomes our protector. The weaknesses and selfishness of the ego (Ravana), the poisoning influence of anger and bitterness (Manthara) that can easily overcome a weak and undisciplined mind (Kaikeyi), the noble mind that can succumb to the lust for power (Vali), the selfless brother who was ready to give up everything for his Lord (Bharata), the evolved being who showed that one can rise above his lesser tendencies with dedication (Vibhishana), the obscene consequence of the over-indulgence in sense pleasures (Kumbhkaran) – the Ramayana is bursting with characters that reflect every lesson that can be learnt in life. However, such lessons often only stick when the strings of the heart are pulled; Swamiji ensured this by telling the tale of Lord Rama as His perfect bhakta – Hanuman.

And that was ultimately my most indelible impression from the camp – how one who embodied Hanumanji can revel in the glory of his Ramji. I vividly remember Swamiji describing a scene where Lord Rama is so moved by Hanuman’s total devotion that He helplessly embraces Hanumanji. I will not let mere descriptive prose let my memory down, since it was pure emotion – my vision blurred as Swamiji got lost in another world, hugging himself as Hanumanji lost himself in the ecstacy of embracing his Lord. Words became sounds; logic and reason had no sway in this realm. The all-consuming joy of the devotee overwhelmed me, and my love for Lord Hanuman was forged into an unbreakable, inexplicable bond in that moment. For this moment, I will forever be grateful for Swamiji. Only one that lives such devotion infused with the Knowledge of the Supreme can invoke such powerful moments in us; and this is why no Global CHYK Camp should ever be missed. Invaluable, priceless, irreplaceable; words do not do justice to what can be gained from such camps and under such guidance. My biggest doubts between the paths of knowledge and devotion were cleared through these seven days, and the seeds of devotion were given the perfect environment to sprout and take root.

I continued my love affair with the CIRS campus, from comfortable lodging to picturesque neighbouring mountain ranges and a scarcely believable, uninterrupted supply of stupidly good food (yes, this is one of the best things about GCC – and it is nothing to be ashamed about!). The relaxed post camp trip to the birthplace of the Mission’s source, to Uttarkashi – to the deafening silence of Swami Tapovanam’s presence mirroring the subdued roar of the Mother Ganga, was one that I will treasure forever. There are many more such benefits of attending any Global CHYK Camp that are too numerous to merely describe – and like any other, Ramayana was an experience that can only be known through experience. It is easy to live a life in the relative cocoon of familiarity; only when we are exposed to such experiences and individuals who are out of the ordinary from our usual life can growth occur. I thank the Lord for giving me the opportunity to gain from this camp, and I sincerely hope all who read this are given the same.